Opera in the age of a pandemic assumes a cutting spectacle. For example, isolated in my home on March 27, I streamed Teatre dell’Opera di Roma’s production of Gluck’s Orfeo ed Euridice. Unlike the popular Met Live in HD series, the Rome Opera broadcast from limited camera angles with poor sound quality, the conductor’s hand often popping up unintentionally into the shot of the stage. Clearly, the company was doing what it could to make opera available while the city in which it was filmed, ravaged by COVID-19, suffered catastrophic tragedy. The story playing out on screen—a stark production of funerals, underworlds, and furies—was meant as an escape, and perhaps in part it was, but it was also an inescapably sharp reminder of the reality outside.

Scholars have long debated the merits of broadcasting opera on television, weighing accessibility and affordability against the challenges of translating a live experience on screen—one that has achieved clichéd stardom by way of famed transformative experiences from Emma Bovary to Pretty Woman’s Julia Roberts. One of my favorite literary epiphanies is in E. M. Forster’s Where Angels Fear to Tread, when Miss Abbott, seeking to champion morality and purity, is overcome by a “magic in the encircling air” after a performance of Donizetti’s Lucia di Lammermoor. Although she tries to shut out the sound by closing her bedroom window, she is troubled all night “by torrents of music” that unmask her English values and reveal that they stem from “a joyless, straggling place, full of people who pretended.”

The current slew of streaming opera during shelter-at-home orders shifts the conversation dramatically, where the stakes now center on the financial survival of companies that are desperately trying to shore up centuries-old claims of art’s human value in troubling times. Fabricating performance environment has never been more essential to a performance’s success and calls for a pressing examination of what environment means to performances: how it is created, how it is consumed, how does it remain spectacular?

Washington National Opera is raising the bar with two operas using the bones of the same set–both cleverly and fantastically. The first, a Don Giovanni for the #metoo era; the second, an opulent Samson et Delilah. Read my reviews of both at Bachtrack here and here.

The Forum for Opera and Musical Performance has two exciting panels at next year’s Modern Language Association Annual Convention, which is in Toronto from 7-10 January 2021, and we’re looking for exciting papers to fill them. Send abstracts to Cynthia Chase or to me, or share it with an opera-lit scholar who might be interested! Deadline is March 20.

We invite papers on how operatic productions after WWII participate in, elide, or mediate historical catastrophe or radical discontinuity. 250-word abstracts to Cynthia Chase, Cornell U (cc97@cornell.edu ).

The second act was especially breathtaking, though it didn’t include the very well-behaved borzoi at Bathilde’s side in the first act. Read my review of American Ballet Theatre’s Giselle at Bachtrack.

There are few things worse than a boring concert–and with a Rach piano concerto on the docket to boot. Thank god for Copland’s third symphony closing out the National Symphony Orchestra’s program Saturday night. Read my review at Bachtrack.

I think it might be impossible for anything involving soprano Christine Goerke not to be some degree of fabulous. Read my review of the National Symphony Orchestra’s performance of Tristan und Isolde, Act 2, at Bachtrack.

I’ve been teaching the Egyptian Book of the Dead and have an entirely new appreciation for the opera’s references to Isis and Osiris. This production, with whimsical designs by Where the Wild Things Are author Maurice Sendak, focused more on childhood fancy, which isn’t always a bad thing. Read my review at Bachtrack.

One week ago in Los Angeles, Meredith Monk’s opera ATLAS opened at the LA Phil. It transcended place to isolate humanity at its root using the globe you see here as a means to access both physical space and inner consciousness–a multiplicity of worlds in sight and sound. I’ve been waiting to see this opera for decades and am so thrilled Yuval Sharon took it on, and I openly confess that when Meredith came out for the curtain call, I cried. 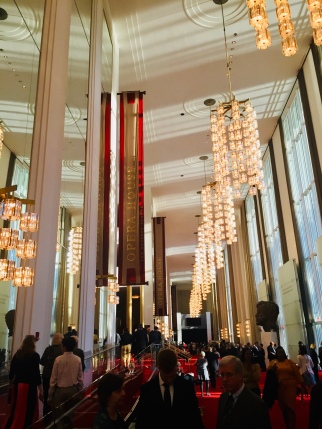 Tenor Riccardo Massi stole the show at the Washington National Opera last night as Mario Cavaradossi in Puccini’s Tosca. He was a stunner in tone, technicality, and theatrical flair. In contrast, it was difficult to say whether Speranza Scappucci’s lead conducting or soprano Keri Alkema’s heavy timbre (in the title role) made for the sluggish tempos that plagued throughout.

But the set, a classic Italian Catholic period piece that Seattle Opera provided, was the real yawner. The future of opera cannot be these sets. Give me Robert Wilson’s hues–for that matter, give me anything in Germany, France, or the Netherlands that know how to bring opera war horses into the twenty-first century with intuitive design, lighting, and inspiration that moves beyond the literal. It’s a central reason why opera feels old to the younger generation and perhaps also why critics have hailed the art form long dead.

In contrast to the dull, dusty contours someone imagined was period-appropriate Catholic Italy, the end of the first act threw me satisfyingly against the back of my velvet seat. The cathedral set rolled up into the eaves, and the chorus took the stage shining in white light against a simple black backdrop. Leave your marble pillars behind. Bring on the architecture of now.

Girl at the Opera
Blog at WordPress.com.
Loading Comments...